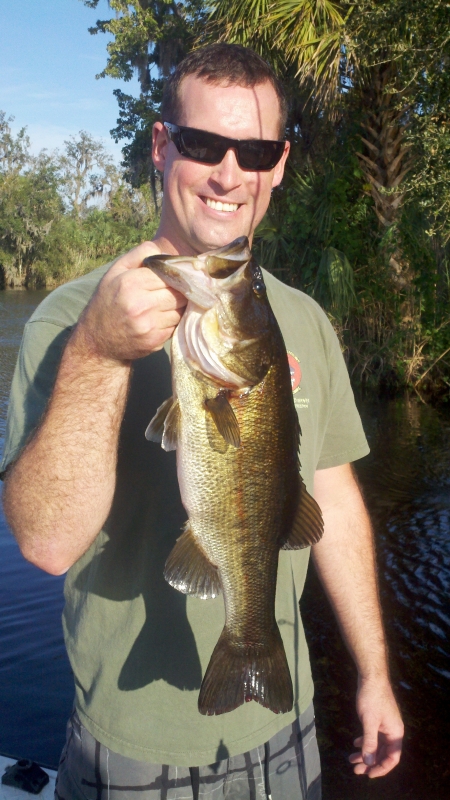 signs show it with some of the trees showing fall and the specks starting to bite and the bass schooling
like they are feeding up for the winter it’s a sure thing.

I have had some really great artificial and live bait trips lately with customers from as far away as
Minnesota and Missouri and they had a great time catching bass on a assortment of lures from
SteelShad lures , Bass Assassin Twitch baits and Stanley spinner Baits. Bass have been feeding regularly
along the main river channel points on baitfish as the flow pushes them along up the river the bass and
a occasional Hybrid striper mixed in the bunch bring the water to a froth in their Feeding frenzys.

Since the Menhaden are small the bass do seem to want smaller wild shiners when fishing those around
the schooling areas so when doing this I do normally use a smaller hook ( weedless) along with a smaller
float so the smaller shiners are still able to swim . To large a hook and it will keep the shiners head
weighted down and he won’t be able to move freely.

As with every year when the water starts cooling down the Crappie start moving up from the summer
depths and will feed on small hair jigs or tube jigs and either with or without minnows depending on
their mood or just a cork with a split shot between the cork and a small hook with a minnow either lip or
tail hooked will also help you catch a limit of the paper mouth species .

A lot of you know that not only do I fish the fresh waters of the St Johns River and Harris and Kissimmee
Chains I also fish in the Mosquito lagoon for Redfish and Trout and the last couple trips there have been
a success now that water has cleared up and the fish have moved back in the shallows and are biting on
Topwater lures ,Live shrimp and also Berkley Gulp shrimp .

I would also like to say thank you to all those that came out to Palm Coast Marina to say hi, shake hands
and Listen to us Live on WNZF 106.3 radio station and also to everyone that came to Dicks Sporting
Goods in Sanford for the Grand opening it was great to be there to support Pure Fishing .

I will see you on the water

Bass Fishing Out Of Okeechobee … END_OF_DOCUMENT_TOKEN_TO_BE_REPLACED

Bass Fishing In Kissimmee Florida This is Capt Steve with the fishing report for Lake Toho. I … END_OF_DOCUMENT_TOKEN_TO_BE_REPLACED

Lake Toho located adjacent to the City of Kissimmee in Central Florida, the 18,810-acre West Lake Tohopekaliga has long boasted a reputation among both recreational and tournament anglers of producing … END_OF_DOCUMENT_TOKEN_TO_BE_REPLACED

Johns Lake is found roughly 6 miles east of Clermont Florida, roughly 1.4 miles west of the Florida Turnpike on Highway 50 and lays on the Orange County/ Lake County borders. The ramp is capable of … END_OF_DOCUMENT_TOKEN_TO_BE_REPLACED

Butler Chain of Lakes Lake Down is the northern-most lake in the Butler Chain with 872 acres of Fish-able clear water. Public Access is located at R. D. Keene Park and Boat Ramp at 10900 Chase Road, … END_OF_DOCUMENT_TOKEN_TO_BE_REPLACED