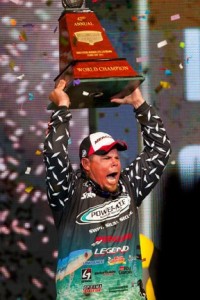 SHREVEPORT, LA. – Chris Lane is originally from Lakeland, FL, now lives in of Guntersville, Ala. The only other Floridian to make the second-day cut to the final 25 was Chris’ brother, Bobby Lane. Shaw Grigsby and Terry Scroggins also made the roster for the classic.

Using a technique he has been known to utilize often, Lane regularly made runs to Pool 4 of the Red, which turned out to be the more productive area of the areas he visited throughout the tournament. Lane capitalized on ever bite and earned the victory along with the $500,000 top prize.

“This is an absolute dream come true,” said Lane. “I stuck with my game plan. It was pretty easy to catch five good fish, but I knew I needed big fish for this to happen. I hit new spots each day and that is a risky move on any water. This was my plan and once I committed I simply stuck with it. I have to thank my family for supporting me and my sponsors were a tremendous help. I really couldn’t do this with out their support.”

Since his first tournament on the BASS circuit, the Stren pro has four first place finishes, two second-place finishes and has finished in the money 57 times. Lane was fishing with 15-pound Stren Brute Strength mono to capitalize on most his bites.

“The fans didn’t disappoint us,” said Lane. “This entire week has been great. The state of Louisiana and all the fans of this sport are terrific. The support that flooded this stadium is a great reflection of the sport of bass fishing. I am truly blessed to have my family here to share this with me.”

There were two Lanes fishing on the final day. Chris’ brother Bobby had a great final day put ended up a bit short. Bobby Lane finished in 20th place with a weight of 36 pounds, 10 ounces.

Bass Fishing Out Of Okeechobee … END_OF_DOCUMENT_TOKEN_TO_BE_REPLACED

Bass Fishing In Kissimmee Florida This is Capt Steve with the fishing report for Lake Toho. I … END_OF_DOCUMENT_TOKEN_TO_BE_REPLACED

Lake Toho located adjacent to the City of Kissimmee in Central Florida, the 18,810-acre West Lake Tohopekaliga has long boasted a reputation among both recreational and tournament anglers of producing … END_OF_DOCUMENT_TOKEN_TO_BE_REPLACED

Johns Lake is found roughly 6 miles east of Clermont Florida, roughly 1.4 miles west of the Florida Turnpike on Highway 50 and lays on the Orange County/ Lake County borders. The ramp is capable of … END_OF_DOCUMENT_TOKEN_TO_BE_REPLACED

Butler Chain of Lakes Lake Down is the northern-most lake in the Butler Chain with 872 acres of Fish-able clear water. Public Access is located at R. D. Keene Park and Boat Ramp at 10900 Chase Road, … END_OF_DOCUMENT_TOKEN_TO_BE_REPLACED