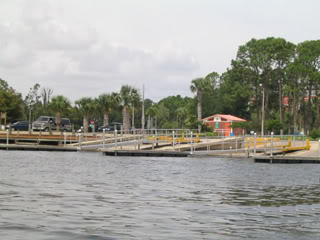 Lake Toho located adjacent to the City of Kissimmee in Central Florida, the 18,810-acre West Lake Tohopekaliga has long boasted a reputation among both recreational and tournament anglers of producing excellent fishing and trophy largemouth bass. The lake received national attention during year 2001 when professional angler Dean Rojas broke the all-time B.A.S.S. tournament record for total weight with a catch of 108 pounds of Trophy Bass. During the four day competition, two 40-pound-plus limits, 21 bass over 10 pounds, and 251 five-fish limits were brought to the scales. Two-and-one-quarter tons of Trophy Bass were weighed in during this fishing tournament.
An extreme drawdown and habitat enhancement project was conducted on the lake during spring 2004 to enhance critical shoreline habitat for Trophy Bass and wildlife utilization. In all, 8.4 million yards of organic material, and associated vegetation that was too thick to provide good fisheries habitat, was removed from 3,506 acres of lake bottom. Subsequently, rainfall from the rash of hurricanes during 2004 quickly re-filled the lake to normal levels. 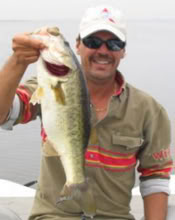 North Steer Beach, Brown’s Point and Goblet’s Cove are popular bass fishing spots on the lake. Fishing in Shingle Creek and St. Cloud Canal can be outstanding when flow is present through these tributaries. Eight, man-made fish attractors hold good concentrations of Bass in deeper areas of the lake during the summer.

Two fish camps, one marina, one county park and four public boat ramps are available to anglers. On the north end of the lake, two fishing piers and numerous access points exist for bank fisherman.

Bass Fishing Out Of Okeechobee … END_OF_DOCUMENT_TOKEN_TO_BE_REPLACED

Bass Fishing In Kissimmee Florida This is Capt Steve with the fishing report for Lake Toho. I … END_OF_DOCUMENT_TOKEN_TO_BE_REPLACED

Lake Toho located adjacent to the City of Kissimmee in Central Florida, the 18,810-acre West Lake Tohopekaliga has long boasted a reputation among both recreational and tournament anglers of producing … END_OF_DOCUMENT_TOKEN_TO_BE_REPLACED

Johns Lake is found roughly 6 miles east of Clermont Florida, roughly 1.4 miles west of the Florida Turnpike on Highway 50 and lays on the Orange County/ Lake County borders. The ramp is capable of … END_OF_DOCUMENT_TOKEN_TO_BE_REPLACED

Butler Chain of Lakes Lake Down is the northern-most lake in the Butler Chain with 872 acres of Fish-able clear water. Public Access is located at R. D. Keene Park and Boat Ramp at 10900 Chase Road, … END_OF_DOCUMENT_TOKEN_TO_BE_REPLACED