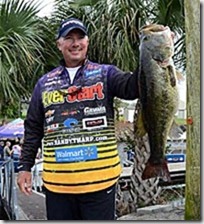 CLEWISTON, Fla. (Feb. 9, 2012) – Does home-lake advantage play a role when 320 of the world’s best anglers gather to see who can find the heaviest four-day stringer of bass for a first-place cash prize of up to $125,000? Just look at the leaderboard of the season-opening FLW Tour bass fishing tournament on Lake Okeechobee.

Randall Tharp of Gardendale, Ala., crossed the stage Thursday with a five-bass limit weighing 33 pounds, 9 ounces to lead day one of the event. Tharp now holds a slim 2-ounce lead over Brandon McMillan of Clewiston, Fla., who caught five bass weighing 33-7. Add to the top-five anglers John Cox (third) of Debary, Fla., and freshly-out-of-retirement Roland Martin (fifth) of Naples, Fla., and you have a handful of anglers with intimate knowledge of Okeechobee leading the tournament’s full field of anglers from all across the United States, Canada, Spain and Japan.

“The wind blew 15 to 20 (miles per hour),” Tharp said. “So I adjusted. And that’s just something you know how to do from fishing here. A lot of the guys here have put all their eggs in one basket.”

Even though he’s not a Floridian, Tharp said his familiarity with the lake gave him an edge on the first day of competition.

“I was going out there to catch a 40-pound sack, to be honest,” Tharp said. “I probably had 20 bites today. Ten of them were big ones. And by big ones I mean 5 pounds or better.”

Tharp said his first bite didn’t come until about 9 a.m. but was well worth the wait. That bite came from a bass weighing almost 10 pounds. By 10 a.m. Tharp was culling his small fish.

Tharp said the wind would dictate where anglers would be able to fish on the second day of competition and it would continue to be a “game of adjustments” for the anglers.

“The weather made it horrible on me,” McMillan said. “It made it tough to flip through the mat and make the bait fall the way you need to make it fall.

“It wasn’t like the Okeechobee that I was used to fishing,” McMillan added. “I figured 20 or 24 pounds would be a good sack. I figured someone would bust 30, but I didn’t figure I would do it.”

Tharp caught Thursday’s big bass weighing 9-8 on the pro side to win $500.

Pros are competing for a top award of up to $125,000 this week plus valuable points in the hope of qualifying for the 2013 Forrest Wood Cup. The top five anglers in the point standings from the four Walmart FLW Tour Open tournaments will qualify.

Daley and Agouros tied for Thursday’s big bass with fish weighing 8-1 in the co-angler division. They each received $125.

Co-anglers are fishing for a top award of $25,000 this week plus valuable points that could help them qualify for the 2013 Forrest Wood Cup. The top five co-anglers in the point standings from the four Walmart FLW Tour Open tournaments will qualify.

Bass Fishing Out Of Okeechobee … END_OF_DOCUMENT_TOKEN_TO_BE_REPLACED

Bass Fishing In Kissimmee Florida This is Capt Steve with the fishing report for Lake Toho. I … END_OF_DOCUMENT_TOKEN_TO_BE_REPLACED

Lake Toho located adjacent to the City of Kissimmee in Central Florida, the 18,810-acre West Lake Tohopekaliga has long boasted a reputation among both recreational and tournament anglers of producing … END_OF_DOCUMENT_TOKEN_TO_BE_REPLACED

Johns Lake is found roughly 6 miles east of Clermont Florida, roughly 1.4 miles west of the Florida Turnpike on Highway 50 and lays on the Orange County/ Lake County borders. The ramp is capable of … END_OF_DOCUMENT_TOKEN_TO_BE_REPLACED

Butler Chain of Lakes Lake Down is the northern-most lake in the Butler Chain with 872 acres of Fish-able clear water. Public Access is located at R. D. Keene Park and Boat Ramp at 10900 Chase Road, … END_OF_DOCUMENT_TOKEN_TO_BE_REPLACED